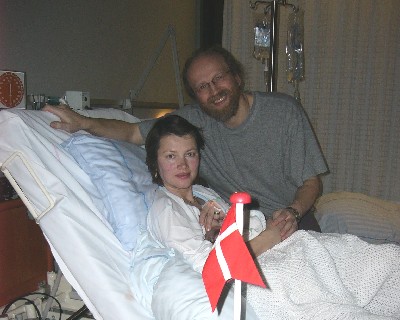 A miracle has happened. Night on 2nd April we got a little baby-girl. She was born 3.600 kg and 55 cm. She is an absolutely adorable creature (in our very biased opinion).

However, the one who loves her most is Nikita. He claims that she is the cutest baby and every day he brings new friends home to show them his little sister. It is difficult to say whom she looks like. On first glance she didn’t remind me Dennis or Nikita. Will see…

It took us (Alexander was with me all the time) about a whole day from my waters broke to her appearance. The delivery was natural and without any problems. The staff was 1 midwife and one student-midwife who spoke fluent Russian after 1 year at the (just a coincidence). When she was born and announced her appearance with a loud cry, she was put on my belly and Alexander cut her navle-slang. Then we were left alone – 3 of us and my girlfriend. But before they left they brought a birthday tray with coffee/juice, sandwiches and the Danish flag. However, we were prepared ourselves as well and celebrated her birthday with champagne. After 2 hours they returned, measured her and checked her reflexes. She is a healthy baby: I am so much relieved.

Unfortunately for us, all the family units at the hospital were busy, so I was placed in 2-person unit and Alexander left for home to get some sleep.

In contrast to , here the babies are not taken away, they are with the mothers all the time. Next day Alexander and Nikita came to see us with a huge bouquet of flowers. Nikita met his sister and liked her a lot. Next day she was checked by a baby-doctor, and after 2 days and one night at the hospital we left for home. It was possible to stay longer, but I didn’t see any point – home is best!

So, now our life is not the same – everything is turning around our little Diana and according her daily routine.

I know that you can be angry with us for keeping this secret, but honestly, we didn’t tell to anyone – were so afraid of miscarriage. This is why…

This is mainly all for the moment.