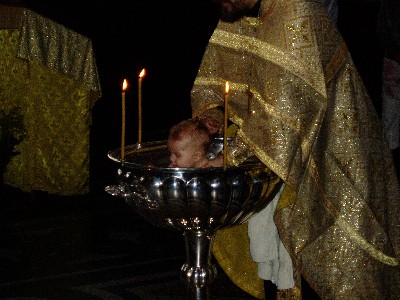 Diana’s baptising is finally done, from the second attempt. In the first, they both - Nikita and Diana got sick (she - because of 2 teeth coming at the same time) and it was postponed.

Last Friday our godfather Igor (Alexander's friend from Umeaa) and his wife Irina came with a plane from . On Saturday we came to the Russian church.

There our godmother (also Irina) with family was already waiting for us. Slowly other guests arrived - few Russian close friends and some of Alexander's Danish colleagues and friends, for whom the ceremony was an interesting and unique event. The church is  an old  Russian Orthodox church of Alexander Nevsky. It was built by  tsar Alexander III for his wife Maria Feodorovna, born Danish  Princess Dagmar.

We were very lucky with the weather. It is exceptionally warm September - dry and ca 25°C so far, at it can be much warmer. So it was very warm in the church as well. I have read that some centuries ago newborns were baptised during the first 3 days after the birth and the winter-born died in a great number, because the churches were ice-cold and the babies were put into water completely. To avoid the high mortality, the catholic and Lutheran churches changed the ceremony so that they only put some small amount of water on a baby head.

First, Diana got undressed and put into a towel. Her godfather held her, while the priest started the ceremony. (Next day on a video we could see what we could not see staying behind - Diana was trying to catch the prayer-book from the priest).

Then she was put into the water (completely) for a moment and then her godmother took her. Finally the godparents read a prey, and Diana was dressed in the lovely white dress I made for her.

Finally she was oiled with some church liquid in a few places (anointing), her hair was cut off and the priest brought her around the most important icons. Me, Alexander and Nikita were staying behind and just watching the ceremony. She got the church name Dina, since there is no saint called Diana and she will have name-day the last week before NY.

The whole ceremony took ca 40 min and Diana was calm to our great relive.

Then she got some presents - mostly silver according to the Danish tradition and nice dresses (the one from her Godfather was exceptionally lovely, from Marks&Spenser). Then we went to a room downstairs to celebrate the event. We served several types of Russian champagne and lux. chocolate.

And finally we returned home via the cemetery, where we lighted a candle for Dennis.

In the evening we had a BBQ with red wine and enjoyed the company of our friends from . We shared many nice memories from the old time in Umeaa. Nikita went directly to a friend birthday party and was not around.

On Sunday, after breakfast, we went to the church again, since Diana for the first time after baptising received the eucharist. We came too early and had to wait ca 1 hour, but again Diana was very nice and calm.

After the church we with our friends (Nikita worked that day) went for sightseeing. First we drove along Strandvej (our local Riviera), then to Fredensborg Castle where our Crown prince pair lives now, and then - to Roskilde Cathedral to see the coffin of Queen Dagmar (Maria Feodorovna) before her re-burial in St-Petersburg next week.

Late in the evening Alexander took our friends to the airport, and we had a calm time at home with Nikita and Diana. Poor Diana, because of all the events, travels etc  she spent lots of time in the car and her daily routine was broken. In the evening, when we put her in her playing ground - she was so happy to move and play with her toy. She starts to sit down and to scroll around and she improves these abilities from day to day.